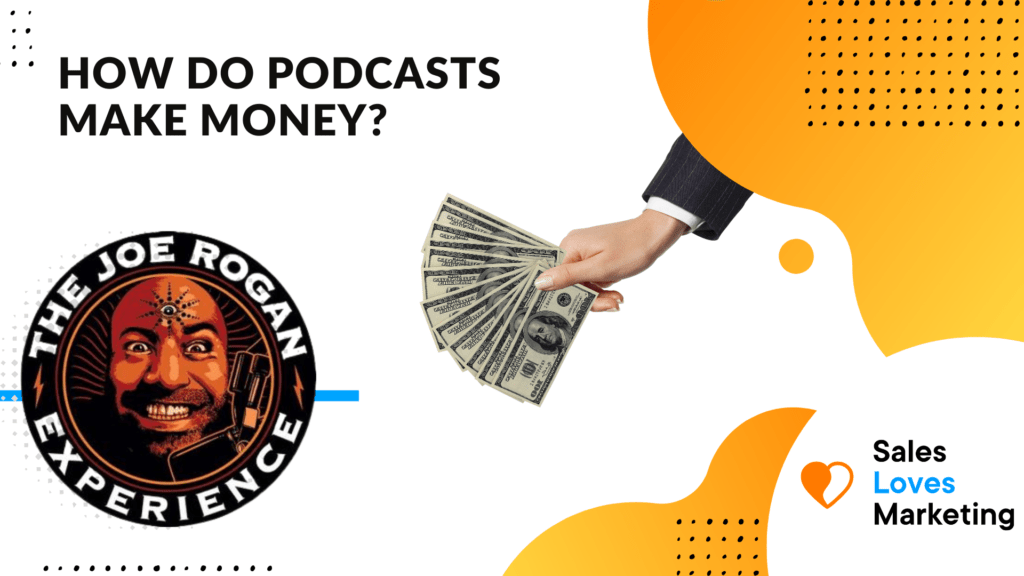 Podcasting is a passion project for many people. Interviewing thought leaders, discussing important topics, and keeping your audience informed are just a few of the reasons podcasts can be an exciting platform to pursue.

After deciding to pursue this passion, the next important question to ask is how do podcasts make money? In this article we are going to discuss different ways podcasts can make money, how much money podcasts make, making money on Spotify, and some of the most profitable podcasts.

There are so many different ways podcasts can make money. From subscription models to sponsorships, you’ll want to choose the monetization method that best suits your podcast, listener base, and goals for the future.

One of the most common ways to monetize a podcast is through traditional advertising. This can be done through either marketplaces that automatically insert ads into your podcast, or through a podcast network that has teams facilitating the process of obtaining ads from companies and inserting them into your podcast.

These advertisement placements have different parameters depending on the platform you obtain them through, your listenership, the advertiser, and more. You’ll want to thoroughly understand the details inside and out so you can know what you’re getting paid and be properly incentivized to grow your podcast.

Gaining sponsorships is one way of monetizing your podcast that cuts out the middleman. Whereas traditional ad models have a podcast advertising agency that facilitates the deals between advertisers and podcasters, a sponsorship deal creates a direct line of communication between the podcaster and the sponsor.

When reaching out to sponsors, you want to choose companies that provide products and services that are relevant to your audience. This conversation should also properly portray how valuable your platform and your audience would be to these companies.

Sponsorship deals are then crafted to include the amount to be paid by the sponsor and the advertisements to be provided by the podcaster on their podcast. As a podcaster you will then have a clear explanation of what’s expected of you in return for their sponsorship money.

One of the most successful podcast sponsorship success stories is Steven Bartlett’s The Diary of a CEO. His podcast is number one in the U.K. on Apple’s podcast charts. Instead of receiving a small cut of the profits for a large number of downloads at a fixed rate, he cut out the middleman and went straight to brands he already knew and loved.

Related Reading: The 10 Best Sales Podcasts for Serious Salespeople in 2022

He reached out to companies directly to sponsor his podcast, citing how valuable his audience is and the impressive numbers he was planning on reaching. His bold approach worked, and he was able to make more than enough money to cover his expenses while still creating valuable content for both his audience and sponsors.

An alternative method for monetizing your podcast that doesn’t include traditional advertisers or sponsors is the subscription model. Through websites like Patreon, podcasters can charge listeners a subscription fee either monthly or per episode.

This model allows listeners to have a say with their wallets. They are directly contributing money to creators that they see value in.

With the subscription model, podcasters don’t have to rely on advertisers or sponsors dictating their worth based on their listenership. The relationship is purely between the podcaster and their audience.

How Much Money Do Podcasts Make?

Now that you understand how podcasts make money, you’re probably asking yourself how much money do podcasts make? The answer varies greatly from podcast to podcasts and platform to platform, but the answer might surprise you.

From Joe Rogan’s exclusive Spotify deal at an estimated $100 million, to a Patreon podcast earning more than $82,000 per month, there is definitely potential to earn an impressive amount of money from podcasting.

While podcasting might feel saturated, it’s the people that are staying consistent and standing out from the crowd that are seeing the financial reward of this medium.

How Do Podcasts Make Money on Spotify

For podcasters who are just starting out on their own, Spotify has a beginner-friendly platform where users can record and edit their audio, place advertisements into their episodes, publish episodes, and more. This platform is called Anchor.fm.

Through Anchor.fm, users can monetize their content with listener donations and traditional advertisements. The majority of the ads are for the Anchor platform itself, recorded by the podcaster.

However, the podcasters that have an exclusive deal with Spotify (Joe Rogan, Brene Brown, Armchair Expert, Archewell Audio, etc.) are being paid differently than smaller podcasts that are using the Anchor.fm platform for ads. While each contract is different, these podcasts have a direct deal with Spotify that would include payment for being exclusively on the platform.

The incentive behind an exclusive deal with Spotify is that these podcasters are paid a large sum of money for being on the platform, while Spotify benefits from an increased number of users on their app. This benefits Spotify when negotiating advertising deals with companies.

Some of the Most Profitable Podcasts

Let’s review some of the most profitable podcasts.

The Joe Rogan Podcast is said to have struck an exclusive deal with Spotify for an estimated $100 million. In addition to this lucrative Spotify deal, Rogan also puts his episodes on YouTube which also pulls in an impressive amount of money in advertisements.

According to a few sources, Tim Ferriss allegedly charges $40,000-$50,000 per sponsorship and he has two sponsors per episode. This has him earning $80,000-$100,000 per episode. With more than 700 million downloads of his podcast, his sponsorship fees are definitely warranted!

Related Reading: The Best Entrepreneurships Books for Founders and Hustlers in 2022

The Daily podcast is a podcast that’s put out on a daily basis by the New York Times. Their raging success has been widely unexpected. In 2020 alone, they made more than $36 million dollars in advertising revenue from their more than 4 million average daily listeners.

It starts as an idea. From the most granular podcasts discussing TV shows episode by episode, to powerhouse interviews with some of the world’s most famous people, podcasts are brimming with great content. Now that you understand the ways in which you can monetize your podcast and how much money podcasts make, will you be next?