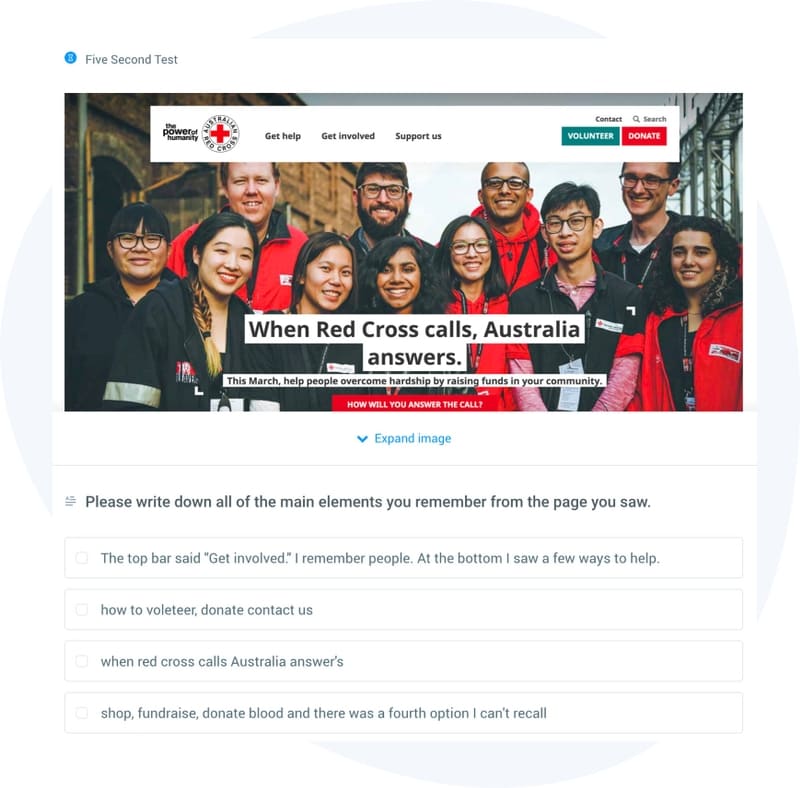 First impressions count; it’s a phrase we’ve all heard frequently, and it applies to online marketing and presentation just as it does to when meeting someone for the first time. Testing a design or product on real consumers is something that all businesses should do, as the greatest impression is made in the initial five seconds.

Five Second Tests is a product created by UsabilityHub that allows designers to create a test for consumers. As the name suggests, the consumer has five seconds to review the design and then give an impression. We will explain in more detail below.

Five Second Tests are priced on three levels, which can be found at the UsabilityHub website. These are Flexible, which is for users who want to offer basic tests and it is free to use, Pro – which offers unlimited tests for $199 per month, and Enterprise whereby the customer has a package and price tailored to their usage. Next, we talk about what Five Second Tests can be used for, and how it works.

What are Five Second Tests?

Five Second Tests are commonly used within the website and product design industry to gauge the effectiveness of a new design. For example, the designer may have a new website that is due to go live. In this case, they need to know whether the message it is conveying is the one the viewer gets. The Five Second Tests method is the least complex and provides the results needed to understand what is necessary design-wise.

How do Five Second Tests Work?

Before being shown the design, the participant will be given brief information regards what they are about to see. They may have the format of the design explained to them, and in cases where it is necessary, they will also be offered a context, so they are aware what they are looking for. They will then be shown the image for the requisite five seconds. Following this, they will be asked questions about what they have just seen, and the impression it gave them. The Five Second Tests are created easily using the software from UsabilityHub and take just a few minutes to prepare.

The Five Second Tests can be used to analyse the effects or efficiency of a design in several areas, and these can be conveyed in the questions asked after the participant has viewed the image. For example, to determine if the intended message got through to the viewer, they may be asked to describe the purpose of the page or image they have seen.

They could also be asked to name the main elements in the image – thus confirming the designer has got the brand or an item in view – or to state what the viewer believes to be the intended audience for the page. Further questions could include asking if the page came across as trustworthy, or what the viewer’s overall image has been. Each of these is akin to market research and can help in pointing to any tweaks that may need to be attended to.

Five Second Tests are important as they give just enough time to replicate the real-life consumer experience. The modern consumer tends to spend a lot of time online and may have many websites open at once. The effectiveness of a page in getting the point across and getting noticed is what Five Second Tests confirm.

The Five Second Tests from UsabilityHub comes with three price plans, as mentioned briefly above. We believe that most businesses will opt for the Executive package that involves a tailored approach including only the features you need and aligned to the number of users. This way, the businesses does not end up paying for features it neither needs nor wants.

The Five Second Tests are offered by UsabilityHub, which provides several products in a similar vein. We think the pricing of the Pro package is reasonable, although we can’t comment on the Executive level as that is individually tailored.

Five Second Tests are simple to create and utilise, and theta re widely used in the website design industry to check a page’s viability before publishing the website. The questions posed are chosen by the user, which can affect the effectiveness of the product. We recommend that it is given consideration by anyone in the design industry who is looking for a quick, effective and affordable way to test pages or designs on a live audience.

Five Second testing is a research method that helps you gauge users’ first impressions of a design. In a Five Second Test, participants are shown an image of a landing page or screen for five seconds and are asked a follow-up question about what they saw.

How to run a Five Second Test?

To start is important to recruit participants, you can invite your own user base to the test or hire participants from a testing tool such as Maze, which can provide you with the number of participants and the demographic targeting you need. Create your test and import the image you will be testing. Select the duration testers will view the image for, which can range from 5 to 20 seconds, and add your questions after the test. During the test, participants have five seconds to view a design or page, after which they answer a few follow-up questions. The questions are key as they determine if your audience understands your message.

Five Second tests are a quick and effective exercise to measure the clarity of your design and how it communicates a message which can later help you improve the user experience of your design.

Where does Five Seconds test figure in a design process?

Five Seconds tests could be used to test after you have reached a point of preparing high-fidelity designs and ran a couple of usability tests.

What can not be done with Five Seconds Test?

As this is a simple task-based user test, it is not suitable for testing flows or designs that have multiple interactions and tasks. If you want to test, for example, a complete checkout experience, the Five Seconds test alone will not be suitable. In this case, you can use it as an additional test method to gain more insights along with moderated or unmoderated usability tests.

What is the purpose of a Five Second Test?

Five Second testing is a form of testing that allows to interpret how well a design transmits a message in the first impression to its intended audience. This kind of test provides both quantitative and qualitative feedback that helps you optimize a design. Therefore, the purpose of a Five Second Test is to measure the ability of a design to transmit its message to the audience and how much was transmitted.